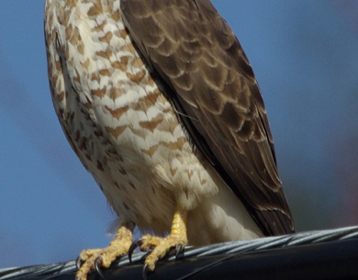 Notes species is housed or managed socially or for breeding purposes.

Dimorphism or practiced ways to individually mark species (such as those in colonies, like giant millipedes).

Comments from the Rating System

Broad-winged hawks are native to the Nearctic and Neotropical regions. They breed throughout the eastern United States and most of southern Canada. Their winter range includes southern Florida, the Pacific slope of southern Mexico, Central America, and northern South America. This species favors dense deciduous or mixed deciduous-coniferous forests for nesting. Broad-winged hawks use openings in the canopy for foraging. They tend to avoid nesting near human dwellings.

Broad-winged hawks are small, stocky birds. Adults have a dark brown back and pale underside with horizontal cinnamon or chestnut barring. The tail is dark gray to black with a conspicuous broad white stripe across the middle and two less conspicuous white stripes at the base and tip. Rare melanistic morphs are occasionally seen in the northern part of their geographic range. These birds are entirely dark brown, with a tail similar to typical adults.

Broad-winged hawks are monogamous. Breeding pairs form soon after arrival on breeding grounds in the spring, around mid- to late-April. Courtship behaviors include flight displays and possibly courtship feeding, though this has not been well documented. Breeding pairs may mate together for more than one season.

Breeding lasts from April through August, and one brood is raised per summer. Nest-building typically begins in late April through mid-May. The male and female both build the nest, a process that takes 2 to 4 weeks. The nest is built in the main crotch of deciduous trees or on a platform of branches next to the trunk of a conifer. It is constructed of dead sticks and fresh sprigs, and lined with bark chips. Some pairs may renovate and reuse nests of other species.

The female lays 1 to 4 (usually 2 or 3) eggs at 1 to 2 day intervals. The eggs can be white, pale cream, or a little bluish. Incubation is carried out by the female and lasts 28 to 31 days. During this time, the male brings food to the female at the nest.

The chicks are semi-altricial at hatching; they are covered in gray down and have open eyes. The chicks are brooded by the female for the first week or so after hatching. During this early nestling period, the male brings food to the nest and the female tears the food into pieces and feeds it to the chicks. After 1 to 2 weeks, the female will start leaving the nest to hunt for herself. Brood reduction (siblicide among nestlings) does occur in this species, but it appears to be uncommon. This aspect of broad-winged hawk breeding ecology has not been well studied.

The chicks leave the nest at 5 to 6 weeks of age, but they will remain within their parents’ territory for another 4 to 8 weeks. They begin to capture their own food at about 7 weeks old. Most broad-winged hawks do not breed until their second year, although some yearlings will breed with an older mate.

Based on a study conducted between 1955 and 1979, the average expected lifespan of a wild broad-winged hawk is 12 years. The oldest known wild hawk lived at least 14 years and 4 months. Primary causes of mortality include predation, trapping, shooting, and vehicle collisions.

Broad-winged hawks hunt from a perch. Typically, they swoop down on prey to capture it on the ground. They are solitary and territorial, except during migration. This is one of the few raptor species in North America that migrates in flocks. At the peak of migration, flocks (called kettles) can number tens of thousands of individuals. These flocks may also contain other raptor species.
Like many hawk species, broad-winged hawks are excellent at soaring. They make use of thermal currents during migration, allowing them to minimize the energy spent on flapping their wings. They are active primarily during the day.

The global population of this species is estimated to be about 1.8 million individuals. Overall, the population is believed to be declining, although data is scarce. In North America, broad-winged hawks are considered quite common.

Common predators of eggs and chicks are avian and climbing predators, including raccoons, porcupines, American crows, black bears, and great horned owls. Predation of adults has not been well documented.

Prejudices against birds of prey still persist among many who wrongly believe that they harm wildlife or present major threats to domestic animals. Biological studies have documented their ecological importance as major controls on rodent populations. Some birds of prey feed on snakes, insects or other potential pests. No species of raptor poses a significant threat to domestic animals.

Instruct guests to never litter, especially when they are in a car. Throwing trash out along the roads not only makes the roads less attractive, but can also attract animals to the sides of the road. Some of these animals might look appetizing to an owl, hawk, or other predator which are then more likely to be hit by passing vehicles. 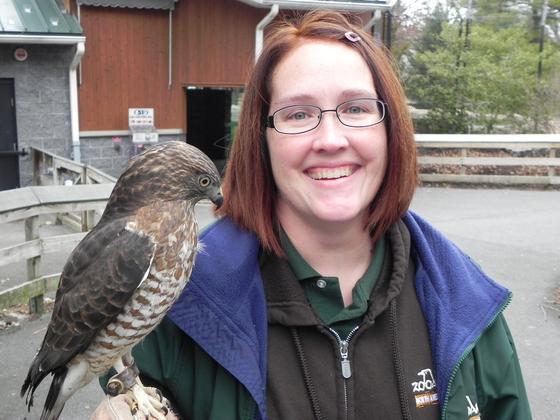 Going for a walk around ZooAmerica.