Very difficult to acquire; around 225-275 individuals in zoos around the world. Only 3-4 AZA-accredited institutions in the US breed this species. Successful captive breeding in Thailand as well.

Forests of Southeast Asia, from the foothills of the Himalayas in Nepal, to China. Extinct on Taiwan.
Neofelis diardi, the Sundaland clouded leopard, is found on the islands of Borneo and Sumatra.

Primarily resides in evergreen tropical rainforests, also have been found in dry and deciduous forests as well as logged and secondary-growth forests.

Extremely beautiful, medium-sized cats with a short, dense, oily, brown coat (white on the belly), with large, nebulous splotches on the sides in darker brown.There is a very large sexual dimorphism. Females average 25-35 pounds with approximately 1-1 1/2″ canine teeth and males are 50-70 pounds with 1 1/2-2 1/2″ canines (have been measured at 1 7/8″ at San Diego Zoo, visible tooth length on adult male. Can be same size as a tiger’s). Jaws can open past 90 degrees. Short, stocky legs, very long and fluffy tail, huge paws, small ears. Hind feet and ankles are extremely flexible and have sharp claws.

Full size achieved at about 12-15 months. First estrus in females can be as early as 11 months (observed possibly due to close proximity to cycling older female). Mostly cublike behavior for first year, then show gradually less cublike and more adult behavior for another year. Potential breeding pairs should be introduced at less than a year of age in a captive setting, before sexual maturity.

Often very shy and reclusive. Females will show very different behavior during their heat cycle – they eat less and are much more loving. But they can become fierce when they come out of estrus. Adults can be spooky and sometimes look at children in a predatory manner.

Listed as vulnerable with numbers decreasing by the IUCN.

Their main threat is loss of habitat to palm oil plantations. They are also hunted for pelts and other body parts. 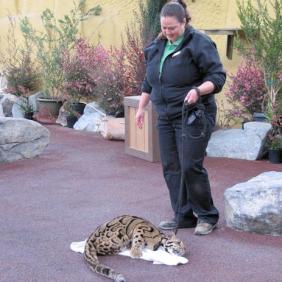 Adult female clouded leopards; the one on the stump is licking a frozen chickensicle.

When adding a new page, remember to add tags!